This communiqué from comrades in Seattle comes to us as the night is ending there. They offer it as a partial report of the many events that transpired: some demoralizing, some inspiring, and some horrifying. Whatever their impact, all of these events are representative of what is to come: crystallized examples of this political and historical moment.

Seattle, bastion of West Coast liberalism and smug leftist exceptionalism, was very busy on Inauguration Day. According to the police, resistance began at 9:30 AM when “an unidentified person threw a rock through the windshield of a Bellevue Police Department officer’s vehicle” while it was parked on Capitol Hill.

The day of protests began with mass student walkouts at noon. Students from several local high schools and middle schools walked out and took the streets immediately. With hand-crafted banners, clever chants, and an air of rebellion, they blocked traffic and marched to Seattle Central Community College. Some students carried a giant banner against the new youth jail under construction.

The mood was raucuos and jubilant, with that particular joy that accompanies expressing rage, in the streets, with comrades.

Unfortunately, that joyous and rebellious spirit was crushed, redirected, and preyed upon as soon as students reached their destination, a rally at Seattle Central. Socialist Alternative organizers jumped at the opportunity to recruit and fundraise. The creative signs and chants were quickly replaced by rote repetition, as chant sheets and identical pre-printed signs were handed out. Kshama Sawant, the local celebrity socialist on City Council, quickly took the stage to promote her party, Socialist Alternative, as the only way to resist Trump; she celebrated the spirit of resistance while her organizers did their best to prevent critical thinking and autonomous action while building their party apparatus. This strategy is identical to Socialist Alternative’s actions during the anti-war movement: creating student front groups, placing their signs in front, and claiming credit for the autonomous activity of students.

This is part of our new reality—the Left is already preparing for a return to the Bush years, building their membership lists and pretending to represent change while funneling people into the same ineffective electoral strategy that will never liberate us. It was disheartening, and unsurprising.

The main event was planned for 5:00 PM, where an autonomous breakaway march was planned to diverge from the Socialist Alternative rally. Inspired by the activities on the East Coast earlier in the day, many of us hoped to seize this moment of popular anger and present other options and examples of fighting back. Against a rally and march that was primarily engineered to build a local politician’s career, anarchists hoped to offer direct action against the structures and the people that oppress us: banks, police, jails, and more.

Unfortunately, a large group was detained and attacked by riot police while en route to the rally. In the scuffle that ensued, many materials were seized, including the black flags intended to signify our presence and help other comrades find the bloc within a sea of signs. According to SPD, the seized items also included shields reading “Right Wing Scum, Your Time Has Come,” wooden poles, heavy pipes, flares, and hammers (we, of course, urge you not to take anything they report as the full truth). 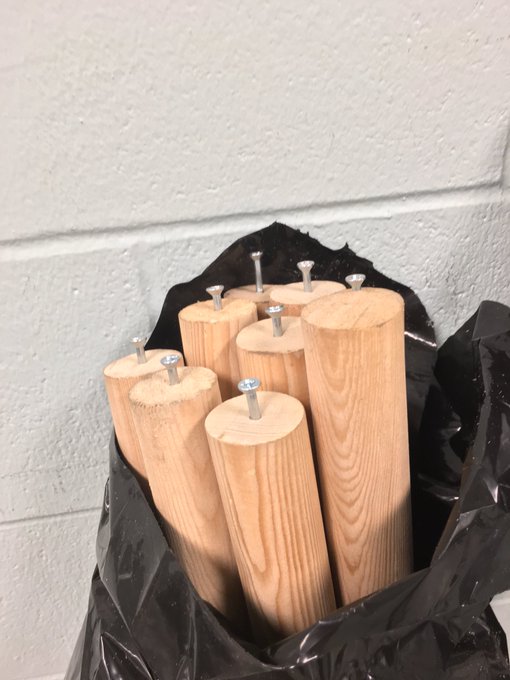 This is an escalation by the Seattle Police; while they have been more than happy to attack anarchists indiscriminately in the past, until now they have not detained people and seized material prior to marches. They haven’t seized people’s flags since Mayday 2012, when the mayor declared a state of emergency and banned flagpoles from downtown.

This escalation of repression, on Trump’s first day of office, is a worrying sign of things to come.

Under-equipped and shaken, the band arrived at Westlake only to find yet another rally featuring Kshama Sawant as the personality of the hour. Her presence was announced to massive cheers, as “the woman who needs no introduction.” With the tone of a home game mixed with a populist rally, the entire event reeked of politicians and charismatic leaders. Faced with poor conditions, many comrades quickly redirected their attention to the University of Washington, where anti-fascists were demonstrating against alt-right misogynist, transphobe, and racist Milo Yiannoupoulos, scheduled to speak at Kane Hall.

Red Square, the central plaza in front of Kane Hall, was awash with confusion and hostility when we arrived. Seeing hundreds of people spread out in the square, we were initially excited at all of the anti-fascists who had come to demonstrate—until we realized that most of them were Trump supporters, there to see Milo speak. Anti-fascists were partially blocking the stairs up to the entrance but were vastly outnumbered by a sea of mostly white, mostly male racists there to see Milo spread hate. A black bloc quickly assembled itself, growing to about 50 people, and helping to hold the line with reinforced banners and bodies. It was confusing, and chaotic; we are used to facing off with police, on terms that are familiar if frustrating. Some of us are used to facing off with explicit neo-nazi boneheads—also easy to recognize. But in the sea of college students around us, it was nearly impossible to tell who was a protestor and who was there to see Milo speak. Only the iconic red hats—many of which were gleefully liberated from racist heads and destroyed—and outright hostility in the form of pushing and shouting, clarified sides. This intermingling, along with the hands-off behavior of the police, made certain interventions difficult. Projectiles are dangerous if a crowd is mixed, and pushing a line forward into a group of unknown composition puts other potential comrades at risk. This was further complicated by conciliatory activists who placed themselves between banners and Milo supporters, determined to de-escalate situations and defuse conflict.

Despite these confusing dynamics, anti-fascists and anarchists were able to maintain a level of conflict and antagonism appropriate to the situation. Several shouting, red-faced men ended up covered in paint, and while no one as famous as Richard Spencer was attacked, there will certainly be many racists nursing black eyes and other injuries tomorrow. These scuffles were aided by long-held anarchist tactics: banners allowed people to attack and then retreat, a somewhat cohesive black bloc allowed comrades to take initiative and then disappear, and we were able to successfully keep fascists from penetrating our ranks.

It is worth dwelling for a moment on the crowd waiting to see Milo’s speech. While it was certainly mostly white, and mostly male, there were other genders and people of color mixed in. Some of Milo’s adoring fans were impressionable internet denizens, easily swayed by bombastic and “edgy” rhetoric; that said, some of them were dedicated racists and bigots: one person shouted “race war” repeatedly, and another loved to call people faggots. They regularly complained that their right to free speech was being attacked, and that there was no safe space for right-wing politics.

Given right-wing attacks on marginalized communities and Milo’s personal attacks on the concept of “safe spaces”, it is ironic that, when they are confronted by an angry and powerful crowd of anti-fascists, they cry about their lack of protection. Also confusing was their insistence that we were the Nazis, because we wouldn’t let them see their favorite fascist in person. Fortunately, few protesters present cared much about free speech for fascists at all, seeing instead the importance of shutting down fascists and preventing them from organizing. This is a welcome change after years of hearing liberals defend racists’ right to free speech.

This back and forth continued for awhile, until we heard a pop and people shouting “comrade down”. Many of us thought we had heard a concussion grenade go off, but gradually became aware that someone had been shot. While we are all anxious to learn more and discuss the context around our comrade’s shooting, we are primarily concerned right now with their wellbeing, and with the scope of the police investigation that will follow. What we do know, based on the SPD twitter, is that a suspect has turned himself in to the police. More details may follow in the future, and they may not.

This is the reality we now live in: it is somehow not surprising for a comrade to be shot at an anti-fascist demonstration.

We saw stabbings in Sacramento, and we’ve seen gun violence here. This is becoming the new normal, and that is unacceptable. As we are writing this, we are also hearing reports that someone drove through downtown Olympia tonight shooting at storefronts and shouting “Hail Trump!” In this context, it is worth thinking about how to protect and care for each other during actions, and otherwise. It is also vital that this kind of violence be passionately resisted and squashed; it is crucial to keep fighting.

The march from downtown arrived at UW shortly after the shooting, and numbers shifted dramatically in our favor. Many disappointed Milo fans left, unable to see their hero, despite the money they spent and the precious tickets they were carrying—some of which were ripped out of their hands. The talk was not completely shut down—some few people made it into the hall, and Milo spoke—but it was significantly disrupted, and the events prove that militant, uncompromising actions against fascists work. The more we disrupt their events, the more we make their hideous faces and odious politics public, the harder it is for them to organize, and the less space there is for fascist sentiments to become normalized.

1. Anti-fascism is an easy sentiment for people to get behind. This is good and bad. We noticed anarchist tactics and aesthetics spreading more easily to liberals and other radicals than anarchist politics and analysis. At one point we found ourselves holding a banner, side by side with others dressed in black, who rushed to inform us that Bernie would have won had the system been more fair. While we are thrilled that diverse people are willing to take militant action against fascists, it is also worth remembering that anti-fascism alone is not enough. We’ve seen where popular fronts leave anarchists: high and dry at best, and at worst in gulags or murdered.

2. The police and fascists are different kinds of enemies. We’ve gotten very used to fighting the police in Seattle—and they have gotten used to fighting us, unfortunately. They were remarkably hands-off tonight, with the exception of the equipment seizure, and were happy to ignore scuffles and fights between protestors and racist scum. While we never look to the police for protection, it is interesting and unsettling that, despite reports of an active shooter on a college campus, they were content to continue guarding the perimeter and not intervening. Most shootings on college campuses involve campus-wide lock-downs; this one garnered no visible police response. This is yet another reminder that the police cannot—and will never—protect us; only we can protect each other.

3. Guns are here, and the risk of gun violence—or stabbing—from white supremacists is real. We have to prepare for these risks, but we also know that specialized, armed militancy will lead toward isolation and increased risk. Our strength lies in the streets—in creating situations that are ungovernable, in making space for others to experiment with autonomy and direct action, and in preventing fascists from organizing. We are very aware of the threat of armed fascists, but are also certain that symmetrical warfare will end poorly for us—and for anarchism. There have certainly been historical moments when it made sense for anarchists to take up arms and go to the mountains—and perhaps people should prepare those skills, in case those times come again—but more often than not we see guns and specialized violence leading to marginalization and increased vulnerability to attacks by fascists and police alike.